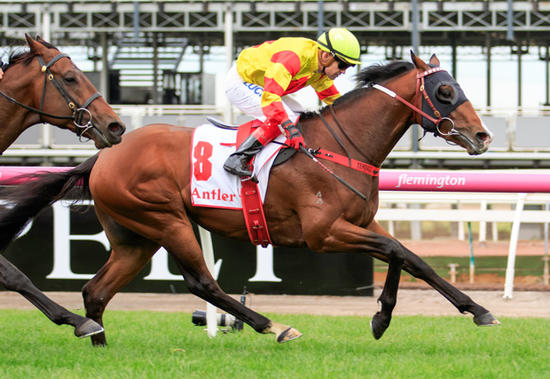 The Darren Weir-trained Snitzepeg scored a surprise win in the Listed Antler Luggage Stakes (Poseidon Stakes) (1400m) to make it two out of two for reigning champion stallion Snitzel on Turnbull Stakes day at Flemington.

Sitting just off the pace set by Plutocracy and Sircconi, Snitzepeg was peeled three by Dean Yendall to mount his challenge.

Hitting the front at the 250 metres, the son of Snitzel held the challenge of the luckless Bravo Tango by three-quarters of a length with Sircconi the same distance back in third

A $260,000 purchase by John Foote Bloodstock from the Three Bridges Thoroughbreds draft at the 2016 Inglis Premier Yearling Sale, Snitzepeg advances his record to 2 wins and 2 seconds from 9 starts with earnings of $132,350.

“He travelled up really nicely, came off the back of Peter Morgan’s horse (Sircconi), was going quite kindly for me throughout and when I gave him a bit of daylight and I asked him to go he quickened up really good from the 200 and was solid to the line,” Yendall said.

Darren Weir said he was unsure whether the winner was up to the class.

“I’ve got to be honest, I was umming and ahhing whether to run, Weir admitted.

“I didn’t think he was good enough but he was given the perfect ride and he had come on for sure from the other day.

“It’s great for Peter Law who has spent a lot of money on yearlings, he’s got a few that were good enough to be sent to Hong Kong and to get a Flemington winner with a horse that is probably not going to go is a terrific result.”

A half-brother to Group III Ming Dynasty Stakes winner Metallic Crown (Northern Meteor), Snitzepeg is the fifth winner from six foals out of the winning Fuasichi Pegasus mare Pegasus Queen who hails fro9m the family of that mighty little New Zealand (Mr) McGinty a 6-time Group I winner on both sides of the Tasman who became a more than useful stallion.

Pegasus Queen has a 2yo Not A Single Doubt filly named Killer Queen and a yearling colt by Deep Field. She was covered by Pride Of Dubai last spring.

After the 2yo filly Nomothaj became 71 stakes winner for Snitzel in the Listed Maribyrnong Trial Stakes, Snitzepeg became number 72 for Arrowfield’s son of Redoute’s Choice.