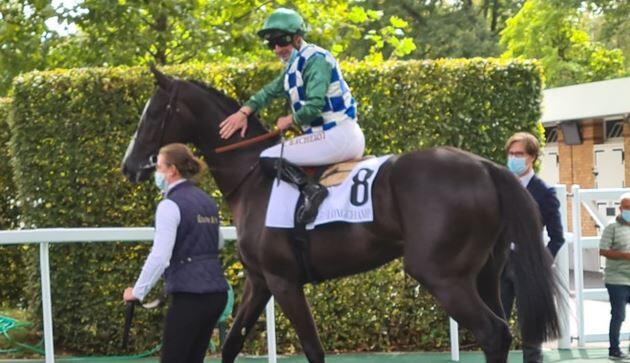 A business relationship formed after Americain won the Melbourne Cup ten years ago have their best racehorse since with lofty targets identified for 2021.

The Stephanie Nigge-trained two-year-old Normandy Bridge won his second race from as many starts in the €56,000 G3 Prix Thomas Bryon Jockey Club de Turquie (1600m) at Saint-Cloud on Friday.

Normandy Bridge is one of 13 horses owned by Australian businessman Gerry Ryan, a part-owner of Americain who was prepared by Nigge in Australia for his successful Melbourne Cup tilt on behalf of trainer Alain de Royer-Dupré.

Ryan pledged to support Nigge when returning to France to train in her own right and Normandy Bridge, one of 13 horses entrusted to her, supplied Ryan with his first French Group win as an outright owner.

"He (Ryan) pushed me to take my (trainer's) licence," Nigge told Jour de Galop. "He bought me horses and has supported me for ten years. He has about ten horses in training with me and we also breed."

Normandy Bridge's victory was impressive, conceding several lengths upon straightening with 500 metres remaining as rider Theo Bachelot switched his mount towards the outside rail and mowed down his four rivals to score by three-quarters of a length.

"Theo had walked the track and had seen that the outside was quite dry," Nigge said.

"I told him, 'this is only his second race, he might lack the experience to do that. Play it cool and see what happens and if you have the gas for it then do it. And if not, then don't'."

Nigge believes Normandy Bridge has the potential to furnish into a quality three-year-old but is conscious of racing him sparingly whilst physically undeveloped.

Normandy Bridge led throughout in the race for unraced colts, joining the likes of future Group 1 winners Victor Ludorum, Waldgeist and Maxios on the honour roll.

Friday's victory at Saint-Cloud as the $7.40 outsider of the five-horse field verified his considerable talent, not least the way it was achieved, and whilst thought was given for the son of Le Havre to run in the €150,000 G1 Critérium International (1600m) at Saint-Cloud on October 24, a race won by the likes of Johannes Vermeer and Thunder Snow in recent years, connections have opted to spell ahead of the G1 Prix du Jockey-Club (2100m) at Chantilly next June.

Ryan also hasn't abandoned his ambitions of winning the Melbourne Cup. Nickajack Cave will carry the colours of Americain during the 2020 Melbourne Spring Carnival as Ryan along with fellow Americain part-owner Kevin Bamford strive for their second Melbourne Cup.

Nickajack Cave was one of 29 Northern Hemisphere horses that arrived at Werribee's International Horse Centre and is being trained by Peter Moody. He is a $26 chance with Sportsbet to win the $8m Lexus Melbourne Cup (3200m) at Flemington on November 3.