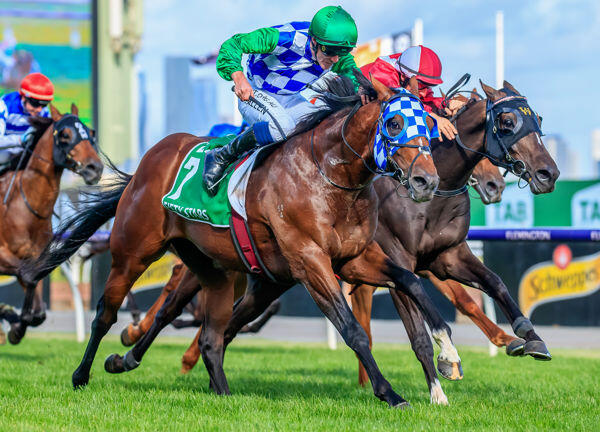 The decision to start last week’s Blamey Stakes (1600m) winner Fifty Stars in the Group 1 Australian Cup (2000m) at Flemington in preference to the All-Star Mile paid off when the son of Sea The Stars chalked up a maiden Group 1 win in the $1,500,000 feature, however, there is still a chance the import will line up for a third week in the row in the $5 million showpiece at Caulfield.

With John Allen in the saddle, Fifty Stars (IRE) charged home in the final 200 metres to deny the West Australian Regal Power (Pierro) by half a length with Melbourne Cup winner Vow And Declare (Declaration Of War) another three-quarters of a length away third in a pleasing return.

It was a tenth win in the race for Lindsay Park and the third in succession after the wins of Harlem in 2018 and 2019.

"It's a real thrill, I wanted to win for Gerry Ryan and the whole team at Lindsay Park are here today, so to win the 10th is just a fantastic effort by everyone for a lot of years, over 50 years," David Hayes said.

"I'm just thrilled. We planned this race for a long time and those carrots can sometimes can throw you off but Gerry in his wisdom said let's go for the Group 1 and it paid off.”

In response to Fifty Star (IRE) running in the All-Star Mile Hayes said,

“They can do it. I saw the Irish mare do it last year and she had three starts in two and a half weeks. We will think about it for a couple of days and not make any rash decisions.”

With the Group 1 Australian Cup, two Group II Blamey Stakes, a Group II ATC Ajax Stakes and a Group III MRC Sandown Stakes on his resume, Fifty Stars (IRE) advances his record to 10 wins and 3 seconds from 23 starts with earnings of $2,043,550.

He was a 110,000 guineas purchase by John Foote out of the Airlie Stud draft at the 2016 Tattersalls October Yearling Sale.

The 5yo son of the champion Sea The Stars is out of the unraced Sadler's Wells mare Swizzle Stick who is a half-sister to the Group II winner and Irish joint champion two-year-old filly of 2012, Viztoria (Oratorio).