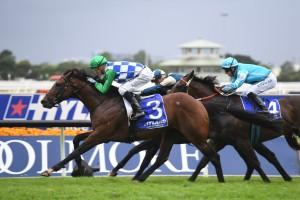 Fifty Stars races into the Doncaster Mile with a win in the Ajax Stakes at Rosehill. Photo by Steve Hart.

Fifty Stars was sent out as the $2.90 favourite and winning jockey Jye McNeil had the Lindsay Park trained four year old travelling sweetly in fifth spot just behind the leading division.

Lindsay Park co-trainer Tom Dabernig said that it appeared that Fifty Stars hit a flat spot in the straight but then picked himself up and went on to score a long neck win over Mask Of Time ($14) with Dyslexic ($6.50) battling on the straight to hold on to third position after racing on the pace.

“I was a bit worried at the 100m mark but I think he just laboured a little bit but once he got his balance he really found the line. It was a good effort, he’s a colt, and he’s building a good record,” Dabernig said.

Dabernig, who trains in partnership with David and Ben Hayes, said that Fifty Stars would now head to the Group 1 $3m The Star Doncaster Mile (1600m) at Randwick on April 6 providing he recovers well from the run on the heavy track.

“He’s naturally a fit horse and if he pulls up well we will look at going to the Doncaster for him. That would be the logical plan. He’s certainly, now that he is out to that distance range, he is building a really good record. He was there to be beaten today,” Dabernig said.

Fifty Stars made it back to back wins for Lindsay Park after taking out the Group 2 $200,000 Blamey Stakes (1600m) at Flemington two weeks ago.