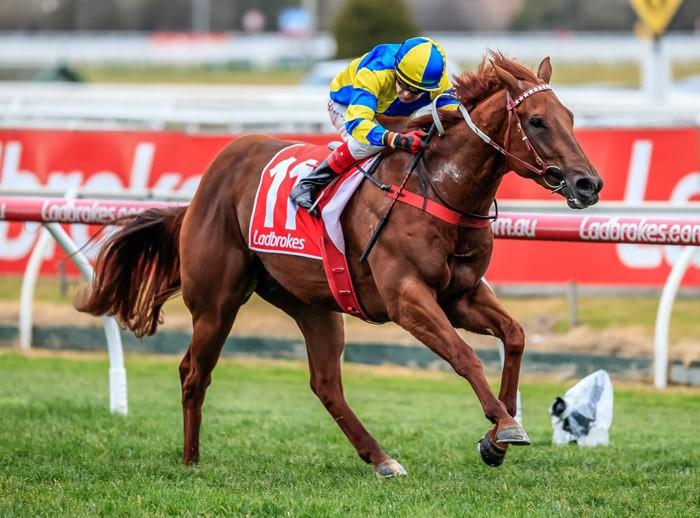 Given a positive ride by Dean Yendall from an outside barrier, Native Soldier controlled the race from the front.

Set to an all-out drive coming around the home turn, Native Soldier showed an impressive turn of foot and there was no catching him over the final 100 metres.

The Darren Weir-trained colt defeated The August (I Am Invincible) by two and three-quarter lengths with Seabrook (Hinchinbrook) a further length back in third.

Coming off a close-up fourth behind Tony Nicconi in the Group III Vain Stakes at his most recent start, Native Soldier earned a maiden stakes success, advancing his overall record to 3 wins and 2 thirds from 7 starts with earnings of $168,850.

"I didn't see that coming to be honest. Obviously, he has taken good benefit from the run," Weir said.

"He went forward and controlled the race. I said to Dean be in the first four, he has to have a bring on run so don't go charging forward. He got across nicely, one furlong there was quite quick, and that was in the back of my mind in the last furlong. But he had a big enough break. He was stopping a bit late, but he was probably entitled to.

"He'll come on again from that. His coat is just about there, he sweated up a little behind the barrier so there is still a bit to come.

"He's on a Guineas path, he's a beautiful horse, a really good sort and he's been a good horse from day one."

Purchased by Darren Weir Racing/John Foote Bloodstock for $160,000 at the 2017 Magic Millions Gold Coast Yearling Sale, Native Soldier is the fourth foal of the hugely popular racemare Belong To Many who was purchased for just $20,000 as a yearling in 2005 and went on to win eight races and over $575,000, highlighted by four stakes wins, including the Group II Sapphire Stakes, when trained by Barbara Joseph.

A daughter of the former Widden shuttler, Belong To Me (USA), Belong To Many was later sold as a broodmare prospect for $525,000 at the 2009 Easter Broodmare Sale with Vin Cox signing the ticket.

Five years later, Belong To Many was consigned to the Magic Millions National Broodmare sale where she was knocked down to Gerry Harvey's Baramul Stud for $230,000.

Belong To Many has a 2yo filly and a yearling filly by I Am Invincible and was bred back to Yarraman Park Stud's highflyer again last season.

Native Soldier becomes the ninth stakes-winner for the champion racehorse Sepoy stands at Darley Stud's Northwood Park property this season at a fee of $11,000.