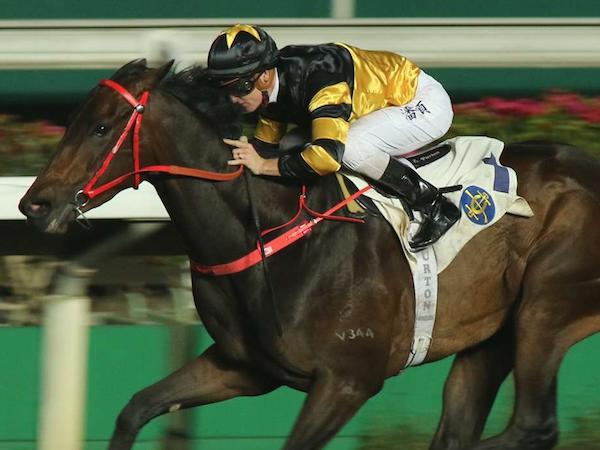 Trainer John Size once again showed the depth of the top-line sprinters in his stable as he prepared the first three horses home in the Group 1 Centenary Sprint Cup (1200m). This time, however, it was emerging star DB Pin in the spotlight, with the five-year-old claiming his maiden Group 1 win at Sha Tin on Sunday (28 January) under Olivier Doleuze.

DB Pin had finished a neck second to fellow Size trainee Mr Stunning at his first attempt at the big time in the Group 1 Hong Kong Sprint (1200m) last month. On this occasion, though, DB Pin had a neck to spare at the line over stablemates Mr Stunning and Beat The Clock, who dead-heated for second. The final time was 1m 09.64s.

“He’s so consistent,” Size said. “He’s honest and he’s diligent, he likes to do his job. He’s made incremental improvement every time he’s gone to the races, but particularly this season. He’s a naturally fast horse, but this season he’s learnt to settle – under Olivier’s guidance, he’s certainly come on and puts most of his energy into the last 400m, which is winning races for him.”

For Doleuze, it was a welcome victory. It was the 45-year-old’s first international Group 1 since Rich Tapestry’s win in the Group 1 Santa Anita Sprint Championship (1200m) in October, 2014 and his first local top-line feature since Eagle Regiment won the Centenary Sprint Cup when it was run over the straight 1000m in 2013.

“It means a lot to me, if you had told me I would win a Group 1 this year when it is so hard to stay on a horse in a Class 5, I wouldn’t have believed you!” said Doleuze. “Hong Kong is very competitive, I’ve been here a long time and people here like new faces. That’s just the game, there are no hard feelings. I’ve had my time, but I still enjoy it, and when you get the chance to sit on a horse like this it makes it all worthwhile.

“Since I’ve been on D B Pin’s back, John has improved him a lot. His run in the Sprint in December was very good and today, I was hoping for confirmation. It seems that the horse is still heading the right way.”

DB Pin jumped evenly from the outside stall in the field of eight and Doleuze pulled him back to settle beyond midfield three-deep without cover off a moderate pace set by Peniaphobia.

“The gate looked a bit tricky before the race, but John knows his horses so well and he gave me the perfect instructions,” the Frenchman said. “He’s very settled at the moment and pulling him back seemed the right move. When I came into the straight, I thought I could run a place but I didn’t think I could win. In the last 200m, though, he found another gear.”

DB Pin holds an entry for the Group 1 Dubai Golden Shaheen (1200m) at Meydan on Dubai World Cup night, 31 March, and Size indicated that a trip to the Middle East could be next on his agenda.

“We’ll see how he goes, he’s obviously got the rating to travel now and he’s a high-rated sprinter so he’s got the figure where he could be competitive,” Size said. “That race is on dirt, he’s won a race here on the dirt track and we’ll certainly consider it.”

Doleuze, who partnered Rich Tapestry to a number of admirable runs on the dirt around the world, believes D B Pin could measure up in the US$2 million feature.

“The good thing with this horse is I think he is very versatile,” the Frenchman said. “I’m not the trainer but I really hope he goes to Dubai and to the dirt race. I’ve been on some very good dirt horses before and he really gives me a great feeling, as good as any of them.”