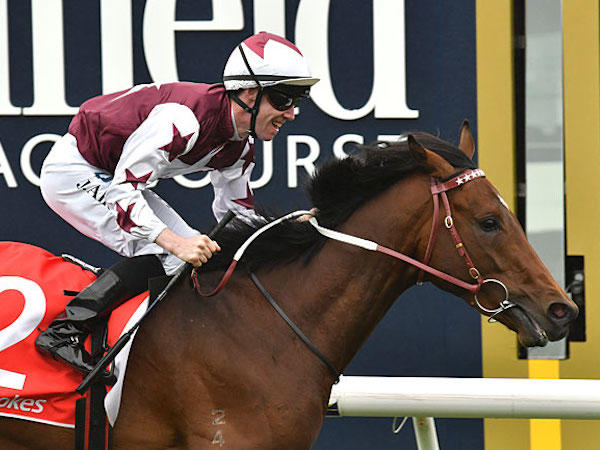 The first three races at Caulfield demonstrated the difficulty of running down the leaders and jockey John Allen assessed the state of play perfectly rating Cliff’s Edge to lead all the way to win the $350,000, Group 3 Ladbrokes Classic (2000m) on Saturday.

The race, traditionally the Norman Robinson Stakes, can be a preview for the Group 1 VRC Derby (2500m) at Flemington on November 4th although after Saturday’s 48th renewal trainer Darren Weir was not sure of the future path of the Canfield Cliff’s colt.

Allen took Cliff’s Edge to the front of the eight strong field working across from the outside barrier with Tangled and Blake Shinn in third on the rails and Ataraxia and Hugh Bowman second on the outside. That was the race decided except that on the turn Ataraxia folded quickly.

Allen kept Cliff’s Edge going for the length of the straight and while the colt naturally tired over the final 200m he had secured the lead and win a long way before. Tangled (Snitzel) kept going for second with Main Stage (NZ) (Reliable Man) and Mark Zahra coming through for third. Aberro was fourth.

The win was costly however for Allen as he was suspended for interference at the 1500m as he brought Cliff’ Edge across to the leaders’ position. For Cliff’s Edge’s strapper, Rachel, she was so excited in the run over the final sectional that when leaping in excitement she struck herself with the lead giving herself a blood nose.

“He has got a great racing style and when you can train them like we do at home, the soundness of the horse (is important) to be able to make him tough, he copes with the work really well. That is why he loves bowling along out in front and relaxes so well. A big thanks to the crew at home, they do a great job looking after him,” said Weir.

“The (last) run definitely toughened him up and Johnny went at a good strong tempo last start. He didn’t go too quick, it was just the second horse was too good that day. Getting back to Caulfield where he dictated and was able to kick on the corner, it was always going to be a differently run race.”