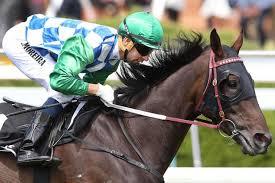 Trained by: Darren Weir
Career starts & prizemoney: 13 starts for 7 wins/ $414,335(as of November 2014)Purchase details: $75,000 Guineas at the 2011 UK Tattersals Yearling SalesThe Darren Weir-trained Signoff (Authorized) has stormed into the Melbourne Cup (Gr 1, 3200m) with a convincing win in the Lexus Stakes (Gr 3, 2500m) at Flemington. Signoff, who was well-supported for the Melbourne Cup in the lead-up to Saturday’s race, has moved to second favourite at $6 for Tuesday’s Melbourne Cup. The northern hemisphere-bred four-year-old was purchased by John Foote for 75,000gns from the 2011 Tattersalls October Yearling Sale.

Signoff (4 g Authorized – Miss Hepburn by Gone West) has now won seven of his 13 races for $414,335 in prize money and became the 18th stakes winner for his sire yesterday.

Weir said the Lexus Stakes had been a long-range plan to try to qualify Signoff for the Melbourne Cup and he delivered with his two and a half length win over Big Memory (Duke Of Marmalade).

“This has been six months in the planning to try to have him right for this day. We just thought if he had bad luck we’ll cop that but if he can’t win the Lexus, he doesn’t deserve his spot in the Cup. “That was the plan all along. So it’s nice that it’s come off.”