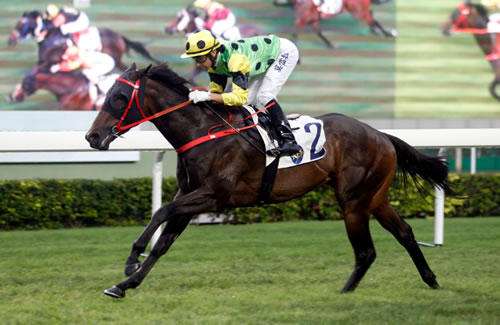 Prepared by John Size, Nothingilikemore surged clear to win the Class Two event over 1400 metres by more than a length under 60 kg.tin the slick time of 1m 21.97s.

“I’m pretty pleased with that effort,” Size said. “That’s a tough job, he’s had to carry a bit of weight and it’s been a bit tougher today but he’s still got it done. He had to do a little bit of work early, in the first 300m, he didn’t look too comfortable. He still had energy to kick strongly when he straightened up and he held them off easily enough.

“I haven’t got a good guide on the track condition as there were only two races on the circle, but there should be some effect with the persistent rain. So he’s had things a bit different here and he’s still managed to win.”

Size said that it might be the last time Nothingilikemore races this season, with the Husson gelding set to be aimed towards next term’s Four-Year-Old Classic Series, which begins with the Hong Kong Classic Mile in January.

“I will have a look at him but that might be enough for him,” Size said. “I had waited specifically for this race because of the 90 to 70 conditions, he did take the last race quite hard but he had plenty of time to get over that, he had a couple of trials and he was looking OK so we pushed on. He’s getting a bit high in the ratings now for where he is at, though, so I can’t promise he’ll go back to the races again this season.”

A $40,000 Inglis Classic purchase from the Toolooganvale Farm draft for John Foote Bloodstock, Nothingilikemore has won four from four and is one of two winners from Lonhro mare Katisam, who comes from the family of Golden Slipper winner Polar Success.

Nothingilikemore looks a future stakes-winner for Group I sire Husson, who stands his first season for Aquis Farm at a fee of $13,200.