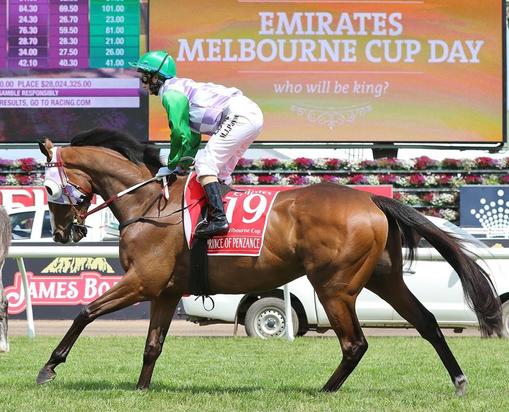 Winning trainer Darren Weir, celebrating his first Melbourne Cup win, paid tribute to his staff and to the horse’s owners and, of course, to Prince Of Penzance himself, who had overcome plenty of adversity in his career (including a bout of colic) to win Australia’s greatest race.

It all started with this dream to win a Melbourne Cup and Sandy McGregor, a mate of mine, offered to put the money up, and the rest is history.” He added: “He’s an amazing horse. He’d had two joint surgeries, then when he was about to come back into work he got a twisted bowel and a colic operation – what an amazing horse.”

Prince Of Penzance, who was purchased by esteemed bloodstock agent John Foote for NZ$50,000 at the 2011 NZB Premier Yearling Sale from the draft of Rich Hill Stud, took his record to 7 wins (including the Gr2 Moonee Valley Gold Cup) and 8 placings (including the Gr1 Moonee Valley Cup & Gr2 Zipping Classic) from 24 starts for $4,405,690 earnings.

A late season foal he went to the Karaka Yearling Sale where he was ignored by buyers around the auction ring and passed-in.

“He was a late foal presented early in the sale and no-one bid on him,” Rich Hill boss John Thompson said.

“He was an athletic horse and caught the eye of a good judge in John Foote who wandered around to our boxes and bought him for $50,000.

“He’s by Pentire who is in the twilight of his career out of a mare who was 20-odd when she had him and she was by Mr Prospector who is long gone.

“It’s just a huge thrill and you know, I had a funny feeling he would go well but I didn’t actually expect him to win.”

“It’s great for the New Zealand breeding industry and goes to show you don’t have to pay a fortune to have a Melbourne Cup winner.”

Trainer Darren Weir earmarked the 6-year-old gelding as a potential Group I winner from early days but had to be patient.