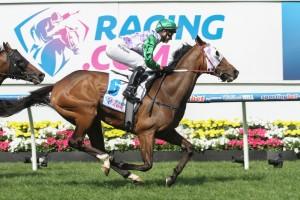 Prince Of Penzance return to his best form with a last-to-first win in the $250,000 G2 Moonee Valley Cup.A son of Rich Hill Stud’s foundation stallion Pentire (GB), Prince Of Penzance is the seventh foal of the imported Mr Prospector mare Royal Successor (USA) a daughter of the Group 1 Yorkshire Oaks winner Only Royale (Caerleon). He was originally passed in at the NZ Premier sale before John Foote stepped in to secure Prince Of Penzance on behalf of Weir for $50,000.

Out of the winners circle since capturing a Listed stakes at Caulfield back in February, Prince Of Penzance was dragged back to last by Michelle Payne after threatening to be caught wide. The Andre Fabre-trained French import Au Revoir (IRE) set the early pace but he had no answer to the fast finishing Prince Of Penzance.

“I have always had great faith in this horse, right even before he started racing,” Payne said.

“He began too slow to ride him forward which was the original plan.

“So just had to go to plan ‘B’ which was to get him to settle and once he got in to a rhythm he was beautiful. I thought I’ve got to ride him for luck now because can’t go round them and win and it was just fantastic.”

“The horse is in really good order. He trained on well since Moe and it’s good to get a win.