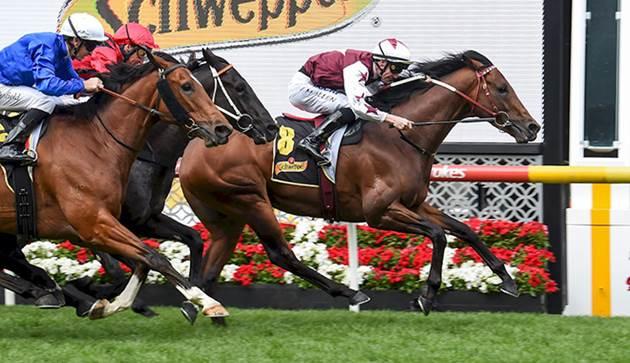 Victoria’s premier trainer Darren Weir believes a weight-for-age win on Cox Plate day is the perfect springboard for Cliff’s Edge into a Group One handicap during the Melbourne Cup carnival.

Weir plans to run Cliff’s Edge on a seven-day back-up in the Kennedy Mile at Flemington after the four-year-old got the job done as $2.80 favourite in Saturday’s Group Two Crystal Mile (1600m) at Moonee Valley.

“It will be perfect for him,” Weir said.

Weir said Cliff’s Edge was a tough horse who had the perfect style by being able to race on the pace and make his own luck.

Those qualities were handy to have on Saturday as jockey John Allen had Cliff’s Edge up outside the leader Siege Of Quebec before applying the pressure to him rounding the home turn.

Cliff’s Edge got the better of Siege Of Quebec and then rallied to have a half-length advantage at the winning post over runner-up Prized Icon with a short half-head to Duca Valentinois third.

“He’s got the best attitude, that’s why he can race like he does,” Weir said.

“He doesn’t pull when he gets up there on the pace.

Weir also plans to run Iconoclasm in the Kennedy Mile after his win at the Valley on Friday night in the VOBIS Gold Star while Group One Toorak Handicap winner Land Of Plenty also heads that way.