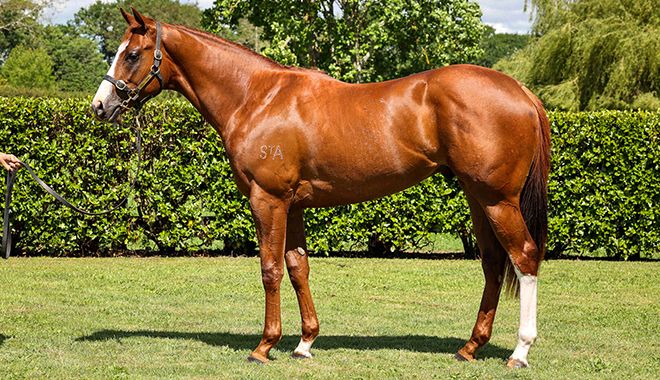 The New Zealand Bloodstock Ready to Run Sale this week was topped by a talented son of Capitalist that sold for $625,000.

Lot 258, the Capitalist colt out of Group III performer Sebrina, has joined the list of purchases destined for the Asian racing jurisdiction after he was secured by bloodstock agent John Foote for Hong Kong trainer David Hall for $625,000.

“He will go to Hong Kong, he (Capitalist) is popular in Hong Kong,” Foote said of the handsome chestnut colt, who breezed in 10.31 seconds.

“He (Capitalist) had a good winner in Hong Kong on Sunday night in Superb Capitalist on debut for Tony Cruz and last night (Wednesday) as well with Savvy Chic winning for Frankie Lor.

“He is doing well in Hong Kong so far. They (owners) are keen on the stallion and were happy to buy him.”

Offered in Australia as a yearling, the colt failed to meet his A$350,000 reserve at Inglis Easter and was then sold for $155,000 to Regal Farm/Upper Bloodstock at the Magic Millions National Yearling Sale.

Foote had inspected the colt as a yearling and was impressed with the way he had matured when inspecting him at Karaka this week.

“I haven’t seen a lot of them (New Zealand yearlings) due to COVID-19 as we couldn’t come to New Zealand, but the ones in Australia we saw and it is good to see them progress, and he did progress,” he said.

“He is a beautiful horse and breezed well. He is by a proven stallion and had everything that you want for Hong Kong at the moment.”

Capitalist has had two runners in Hong Kong for two winners.