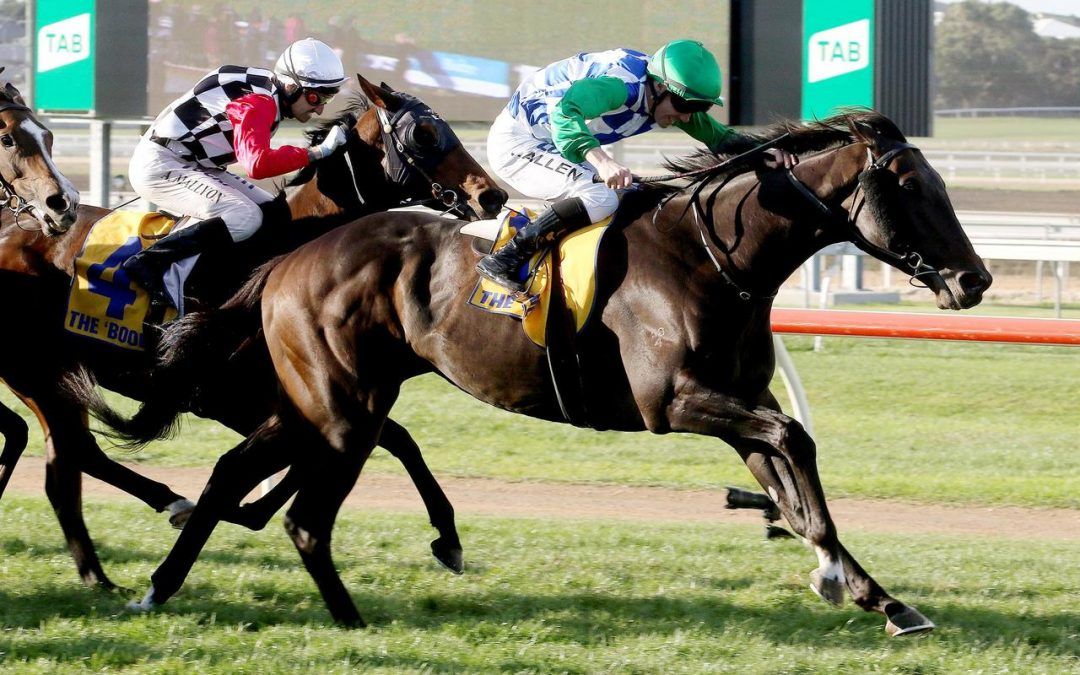 Twelve months ago at Warrnambool Furrion (GB) was the talk of the town, after he kept his record at a perfect three for three with a two and a half-length romp in a benchmark 70 over 1700 metres.

The northern hemisphere-bred son of Camelot (IRE) has kept up an enviable strike rate since but a stakes win had proven to be a bridge too far – until Thursday that is.

Back to his former playground, Furrion (GB) did the right thing by punters when carrying top-weight to victory in the $250,000 Listed Warrnambool Cup (2350m).

It could not have played out any better, he drew barrier one and did not have to go around a horse.

John Allen had the Hayes, Hayes and Dabernig-trained gelding travelling sweetly midfield and was gifted one run after another along the rail and by the time they reached the home bend the son of Camelot had hit the front.

He kept up a strong gallop to defeat Sheezdashing (Myboycharlie) by three-quarters of a length with Divanation (All Too Hard) a long-neck back in third.

Coming off a second in the Group III Easter Cup at Caulfield, the Gerry Ryan colour-bearer was winning for the first time in four starts for Lindsay Park who took over the training when Darren Weir was disqualified.

“He’s a horse we have always had a high opinion of when he was at Darren’s, we always thought he was a Group horse,” Allen said

I’ve only been on him once before so I’m two for two.

Co-trainer Ben Hayes said they have mapped out an ambitious spring for Furrion (GB).

“Today he showed he can run out a strong 2400m. He did a really good job because he took the run early, hit the lead a long way out and was strong through the line,” Hayes said.

“Johnny gave him a 10 of 10 ride. Thanks to Gerry Ryan for supporting us and he is a great client of ours.

I think he is one of the more exciting horses going in to the spring. We will put him away now, give him a five or six-week break and then get him back in and set him on a Caulfield Cup path.

“It really helps (winning a stakes race) to get his rating up so we don’t have to worry about getting in to the races, which takes a little bit of pressure off us trainers.

Purchased by John Foote for 60,000 guineas out of Book 2 of the 2016 Tattersalls October Yearling Sale, Furrion is the best of three winners from four to race out of the Shamardal mare Acquainted who was runner-up in the Listed Cheshire Oaks.

Acquainted is one of six winners out of the Group III Ascot Princess Royal Stakes winner Love Everlasting (Pursuit of Love) who hails from the family of Epsom Derby and Irish Derby hero Shirley Heights.

Now three-year-olds, that crop of 78 live foals includes Lord Arthur who recently won the Group II Championship Stakes at Ellerslie as well as the Group 1 NZ Oaks third Star Karen and the Group III-placed Swords Drawn and Blue on Black.