All eyes on Normandy Bridge at Saint-Cloud 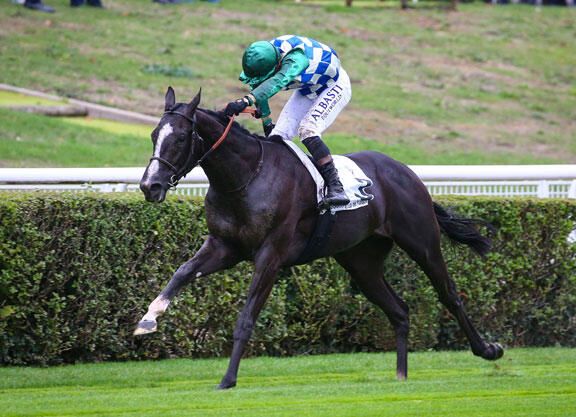 While most Australian attention this weekend will be on the home front, tonight’s Saint-Cloud card is likely to be keenly watched with some familiar colours to the fore.

The Criterium de Saint-Cloud (Gr 1, 2000m), the only juvenile feature in Europe at a middle distance, has surprisingly thrown up a number of horses that have ended up striking success in Australia, whether as visitors or as permanent imports.

Out of last year’s race, Sound Of Cannons (Nathaniel) has already joined the John O’Shea yard, stepping out for his first barrier trial at Warwick Farm yesterday morning.

Perhaps Bolshoi Ballet (Galileo), a brother to last year’s Zipping Classic winner Southern France (Galileo), is one who will attract attention of local buyers should the two-year-old fail to develop into a stallion prospect.

However, it is the Criterium International (Gr 1, 1600m) that is set to attract most attention down under with Normandy Bridge (Le Havre) to carry the colours of owner Gerry Ryan – the blue and white checks with green sleeves and cap – in the feature.

The Stephanie Nigge-trained Normandy Bridge set tongues wagging with his last-start win in the Prix Thomas Bryon (Gr 3, 1600m), taking him to two wins from two starts. Ridden by Theo Bachelot on what was a quickly deteriorating heavy surface, the jockey came to the stands’ side at the top of the stretch, almost 500 metres from home.

It appeared as though the gamble had not paid off as he lagged behind his rivals for most of the straight, but a plan to get out to that lengths-superior ground paid off near the line as he swept up to take victory. While it appeared a photo finish, the winning margin was actually three-quarters of a length.‘

The Ryan-Nigge partnership has its roots in Americain’s (Dynaformer) successful Melbourne Cup campaign a decade ago, as Nigge – daughter of Markus Nigge, whose sole Australian starter was Toorak Handicap (Gr 1, 1600m) runner-up Trevieres (Gold Away) in 2013 – was Alain de Royer-Dupre’s assistant trainer, charged with overseeing the horse’s Australian preparation.

Americain, owned by Ryan in partnership with Colleen and Kevin Bamford, won the Geelong Cup (Gr 3, 2400m) ten years ago this week before taking out the Melbourne Cup.

“I met Monsieur Ryan in Australia when I was lucky enough to spend three months down there after Alain de Royer-Dupré entrusted me with Americain,” Nigge told ANZ Bloodstock News. “I have to thank Monsieur Royer-Dupré because that’s how I got to know Monsieur Ryan and it was he who bought my first horses to train.

“I ended up staying with Americain when he was with David Hayes and then I accompanied him to the States to say goodbye when he went to Calumet Farm. It was an extraordinary adventure that lasted three years.

“Monsieur Ryan is very enthusiastic and he has always shown a lot of faith in me. He always buys good yearlings and has been a huge supporter. I can’t thank him enough. I can’t tell you how happy I was that I won my first Group race with one of his horses. For a young trainer and a woman to have a client like him who backs you. It’s every young trainer’s dream.”

That first Group race win was Normandy Bridge’s Prix Thomas Byron, a victory that has put the bay on a path towards next year’s Prix du Jockey Club (Gr 1, 2100m).

First though is tonight’s Criterium International, a race that counts two-time Dubai World Cup (Gr 1, 2000m) winner Thunder Snow (Helmet) and Melbourne Cup runner-up Johannes Vermeer (Galileo) among its recent winners. Today’s Cox Plate contender Armory (Galileo) finished a 20-length second in a two-runner race last year on a heavy surface, with the race upped to a mile in a bid to avoid another drop in numbers.

It seems to have succeeded with a field of seven set to line up tonight – still small, but an improvement on last year’s match race.

“It’s a Group 1 but it’s also part of his education for next year, because you won’t see him out before April and the good races come up fast,” Nigge said. “He needs to learn to be in among horses and with foreign runners used to running over 1,400 mètres I expect there to be pace on.

“I said to the owner that he’s won once by making all and going solo up the outside rail so the race on Saturday is to give him more experience with a view to next year.

“Next year he’ll be running over 2,000 or 2,400 metres but he has a long stride on him and does everything so easily that I’m happy to stick at a mile this year.”

What has surprised Nigge is how Normandy Bridge has emerged as a potential Group 1-winning two-year-old, although such was her opinion of the son of Le Havre (Noverre) that she aimed him towards a debut in the Prix de Fontenoy (1600m), a newcomers race that has been the starting point for subsequent Group 1 winners like Victor Ludorum (Shamardal), Waldgeist (Galileo) and Epicuris (Rail Link).

“He always moved really well and as far back as the spring I felt he was a nice horse, though not necessarily a two-year-old type,” she said. “Normandy Bridge was broken by Philip Prevost Baratte but he was with us by October or November last year and we did lots of groundwork with him, just easy cantering.

“Starting on August 15, we stepped him up and he did three bits of work with a view to making his debut in the Prix de Fontenoy. He’s very well balanced, not too heavy and so we thought we’d aim him at that race. He essentially prepared himself.”